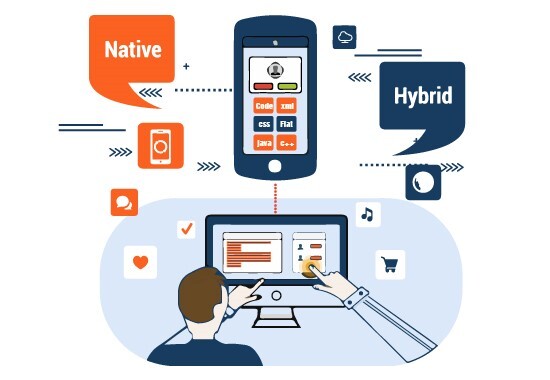 It's of no surprise, that the mobile app industry thrives actively. With over 3.5 billion smartphone users across the globe (according to Statista), mobile applications require rapid updates and innovations. The competitiveness in the industry is at a strain.

According to a study on mobile usage by Smart Insights, over 90% of mobile time is spent on apps. While according to another study by global tech and protection and support company Asurion, the average person struggles to go a little more than 10 minutes without checking their phone.

In this article, you’ll learn about the pros and cons of both Native and Hybrid mobile app developments, as well as get a general view of Ionic and Flutter technologies.

With native mobile app development, you will need to develop one application for iOS and one for Android and upload them separately in the corresponding app stores.

Native apps are specifically made for one operating system, thus it's logical that they should be better customized and more thoroughly considered. These may include custom screens and gestures, customized simple and intuitive navigation and maps, common places for buttons like menu, search, etc. Native apps maintain aspect ratio, which is the ratio of the width and height of various screens and is an indicator of high-quality images.

· Fewer bugs during the development process

chances of getting stuck in bugs as they don’t rely on cross-platform tools, such as Xamarin or Cordova.

· There is no flexibility regarding native apps

Native app developers code for one specific platform and use separate tech stack for iOS and Android. Thus, these processes are highly tailored and require a more in-detail approach. Most of the time, clients hire separate teams.

Although native app development saves time wasted on bug fixing, the overall development process is much trickier and time-consuming. If you’re working with time and material model and pay an hourly rate, then time is money. Plus, it requires more labor. Maintenance and support service is also more expensive.

Native apps are usually usable upon downloading from the corresponding stores. The downloading process takes some time on such activities as finding the application, accepting terms and conditions, allowing or denying some functionality, filling in some required sheets. A lot of users simply don’t have that much time and patience to spend on such a lengthy downloading process; as a result, the app owners lose 20% of their potential users at some stage of an app funnel.

Although native apps are more secure, less time consuming, function offline, they’re simply not good fits for limited-budget companies. Today, according to Statista there are 2.560.000 apps available in the leading app stores. Hybrid apps are simply taking the role due to their flexibility and affordability thus it’s an additional burden for startups or low-budget companies to spend money on developing an app for separate platforms.

We have already drowned out the major arguments and parallels between the advantages and disadvantages of native and cross-platform development while discussing the native apps. As mentioned some things that make hybrid apps more preferable include:

Let’s see what’s the difference between Native and Hybrid approaches, and understand why Hybrid wins over Native.

· Maintenance and support is easy and less costy

Everybody, at least once, got frustrated using their favorite app because of the update of the specific operating system. This is especially an up-to-date topic for native apps. Nor is it only annoying but it’s also very costy for many users to change their mobile device as soon as the operating system is updated. A hybrid app or a cross-platform app easily bypasses such problems, and most of the time companies just rely on the software maintenance support that is usually provided by qualified software development agencies after the project ends.

· Effortless integration with other apps

Native apps are less flexible as they run on a specific operating system thus it limits the ability to work in harmony with other apps. Simplicity is number one priority for attracting more users to install your app. Hybrid apps take advantage of this issue as they both perfectly connect with mobile’s system environment and get easily integrated with other apps in the store without a slightest of friction.

Google Play Store and App store are the 2 ‘’giants’’ in the online app market. If you are serious about your product, it’s obvious that you should, first of all, submit your app to Google Play store and App store. Although these two welcome both hybrid and native apps, it’s always less risky to develop a hybrid app, which has the potential to be submitted at least to one or hopefully both of these stores.

Hybrid apps provide an eye-friendly and attractive design, and a consistent experience across both iOS and Android platforms. Cross-platform apps function perfectly for mobile meantime embracing the web. With hybrid approach, you can be sure that your app offers superior UI experience. It helps easily and quickly download graphics and content.

Although hybrid mobile apps are ideal solutions for the limited-budget businesses, require less time, and allow reaching wide audiences there are still some drawbacks that should be taken into consideration.

Hybrid mobile app is developed for multiple platforms thus it should be adjusted accordingly. There should be a mid-oriented interface for both iOS and Android users. So, challenges may occur for Android users if the developers heavily focus on iOS functionalities and vice versa.

As hybrid mobile apps are less flexible when it comes to operating in a specific system, the loading process may take more time. However, the loading time difference is so little that the users won’t be able to notice it. Plus, this isn’t related to content-oriented apps, as they are simple and don’t require complex functions.

Although Ionic and Flutter are separate mobile app development technologies and have specific functions, there are still some things that they share in common, and make them stand out among other technologies. Both Ionic and Flutter give a chance to create a UI framework that works everywhere, has great performance, is highly scalable, and has a nice and neat look wherever it runs. Ionic and Flutter have one shared codebase designed to address mobile, desktop, and the web.

Common to this case, there is also the main distinction between these two. Ionic embraces open-web capabilities even in case of a little possibility. Therefore, Ionic is entirely based on open-web technologies, which include web languages that are used to build Ionic apps, standard-based UI components running in your app. On the other hand, Flutter has the approach of creating a brand new ecosystem from scratch. Thus, almost everything about Flutter is based on its own standards that aren’t included in nowadays browser capabilities, web languages, etc.

Flutter technology is a great solution if you’re looking for strong animations. It has outstanding options for widgets that are incorporated to ensure the native performance of the application. Some of the options include icons and fonts, navigation, scrolling.

Ionic is easier to move across the platforms and is based on the look and feel.

In conclusion, entrepreneurship is a challenging experience nowadays. A lot of startups and even big enterprises prefer fast and more convenient mobile app development solutions to fulfill their instant strategies. Hybrid mobile application development is often more preferred over native mobile app development. Taking into consideration its fast results, low-cost budget, scalability, less testing time, easier usage, and the rest of the advantages it has – Hybrid app development wins for sure!

CodeRiders is a software development company based in Armenia with a wide-ranging set of technology capabilities to build solutions for your business needs.

© 2022 Your Software Supplier. All Rights Reserved.